Natural henna stains only a rich red brown. Products sold as "black henna" or "neutral henna" do not contain henna, but are instead made from other plants, or from other substances altogether.

So-called "neutral henna" does not change the color of hair. This is not henna powder; it is usually the powder of the plant Senna italica also known as Cassia obovata or a closely related Cassia species.

So-called "black henna" powder may be derived from indigo (from the plant Indigofera tinctoria). It may also contain unlisted dyes and chemicals.[30] "Black henna" may contain p-phenylenediamine (PPD), which can stain skin black quickly, but can cause severe allergic reactions and permanent scarring. The FDA specifically forbids PPD to be used for that purpose, and may prosecute those who produce "black henna'.[31] Artists who injure clients with "Black Henna" in the U.S. may be sued for damages.[32]

In the 1990s, henna artists in Africa, India, Bali, the Arabian Peninsula and the West began to experiment with para-phenylenediamine (PPD) based black hair dye, applying it as a thick paste as they would apply henna, in an effort to find something that would quickly make jet black temporary body art. PPD can cause severe allergic reactions, with blistering, intense itching, permanent scarring, and permanent chemical sensitivities.[33][34] Estimates of allergic reactions range between 3% and 15%. Henna does not cause these injuries.[35] "Black henna" made with PPD can cause lifelong sensitization to coal tar derivatives.[36] "Black henna" made with gasoline, kerosene, lighter fluid, paint thinner, and benzene has been linked to adult leukemia.[37]

The most frequent serious health consequence of having a "black henna temporary tattoo" is sensitization to hair dye and related chemicals. If a person has had a "black henna tattoo", and later dyes their hair with chemical hair dye, the allergic reaction may be life threatening and require hospitalization.[38] Because of the epidemic of para-phenylenediamine allergic reactions, chemical hair dye products now post warnings on the labels: "Temporary 'black henna' tattoos may increase your risk of allergy. Do not colour your hair if: ... – you have experienced a reaction to a temporary 'black henna' tattoo in the past."[39]

Para-phenylenediamine is illegal for use on skin in western countries, though enforcement is difficult. Physicians have urged governments to legislate against "black henna" because of the frequency and severity of injuries, especially to children.[40] To assist prosecution of vendors, government agencies encourage citizens to report injuries and illegal use of "PPD black henna".[41][42] When used in hair dye, the PPD amount must be below 6%, and application instructions warn that the dye not touch the scalp and the dye must be quickly rinsed away. "Black henna" pastes have PPD percentages from 10% to 80%, and are left on the skin for half an hour.[43][44]

Para-phenylenediamine "black henna" use is widespread, particularly in tourist areas.[45] Because the blistering reaction appears 3 to 12 days after the application, most tourists have left and do not return to show how much damage the artist has done. This permits the artists to continue injuring others, unaware they are causing severe injuries. The high profit margins of "black henna" and the demand for body art that emulates "tribal tattoos" further encourage artists to deny the dangers.[46][47]

It is not difficult to recognize and avoid para-phenylenediamine "black henna":[48]

if a paste stains torso skin black in less than ½ hour, it has PPD in it.

if the paste is mixed with peroxide, or if peroxide is wiped over the design to bring out the color, it has PPD in it.

Anyone who has an itching and blistering reaction to a black body stain should go to a doctor, and report that they have had an application of para-phenylenediamine to their skin.

PPD sensitivity is lifelong. A person who has become sensitized through "black henna tattoos" may have future allergic reactions to perfumes, printer ink, chemical hair dyes, textile dye, photographic developer, sunscreen and some medications. A person who has had a "black henna tattoo" should consult their physician about health consequences of para-phenylenediamine sensitization 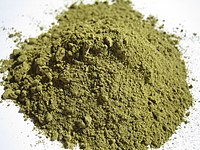